GIANTS ON RECORD – America’s Hidden History, Secrets in the Mounds and the Smithsonian Files 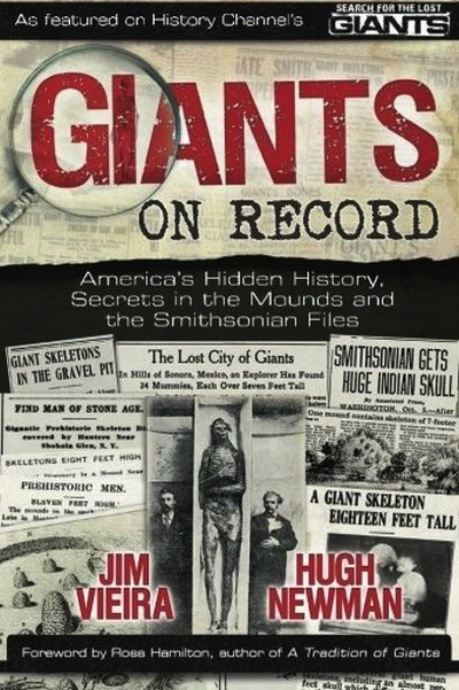 Over a 200-year period thousands of newspaper reports, town and county histories, letters, photos, diaries, and scientific journals have documented the existence of an ancient race of giants in North America. Extremely tall skeletons ranging from 7 feet up to a staggering 18 feet tall have been reportedly uncovered in prehistoric mounds, burial chambers, caves, geometric earthworks, and ancient battlefields. Strange anatomic anomalies such as double rows of teeth, horned skulls, massive jaws that fit over a modern face, and elongated skulls have also been reported. Many of these discoveries were sent to the Smithsonian Institution in Washington D.C., never to be heard about again. The Smithsonian’s own records describe at least 17 giant skeletons in annual reports. This book examines a possible cover-up initiated by Smithsonian scientists starting in the late 1800s. The origins of “the tall ones” has been shrouded in mystery for centuries, but this book reveals where they came from, why they got so large, and the reason for their downfall, using the latest scientific research, genetic data, native myths, news reports, and ethnological research.

“Jim and Hugh have put together what is by far the best compilation of everything that is known about the reports of ‘giant’ skeletons recovered in America from the 1700s to the late 1900s. Giants on Record is a well organized, logical, and thoroughly researched book.” – Dr. Greg Little, author of Path of Souls.